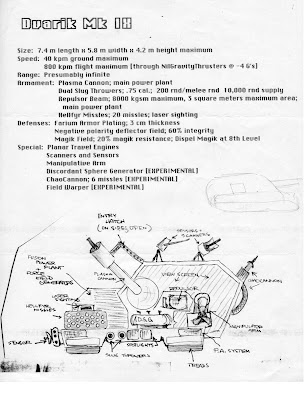 Most of the stuff on Dave was never statted out; I just adjudicated it as needed.  In fact, I still don't know what some of it does.  I created some of the items/powers with the idea that I'd make it up later when I needed it for story/plot/adventure purposes.
Farium Armor Plating!  Copyright ME!  It seems that someone in the Star Wars Universe made this one up in 1990 -- and for STARSHIP ARMOR PLATING!  Hah!  How about that!?!  I said it first!  Dibs!  Actually, in Queston, Farium is a strong, light metal that can be found only on the continent opposite the one that the Fyrkingdom is found on.  Extremely rare material in Queston.
Hellfyr Missiles are just huge fireballs, 15d6 or so, and they work swimmingly against dragons...
Discordant Field Generator?  Probably something that makes folks angry.
Field Warper?  I think that kinda "Passwalls" the tank through stuff...
ChaoCannon?  Do you know what an infinite improbability drive does?  What about a genesis device?

I remember firing the Chaocanon into a couple of armies that were meeting on the battlefield, and it caused them all to stop what they were doing, hop around on one foot, scratch their bums, and a variety of other random things...