Queston NPCs and ALL CALL

TL:DR -- I share NPCs and I call for submissions for the "Rapscallion Registry" a new, OSR version of the old TSR "Rogues Gallery"

In 1983, I started my Queston campaign world.  It was a mish-mash of bad puns, some clever ideas and a lot of fun.  I always think of Queston as a funny, slightly silly world where the comic heroes face real, dark horrors and evil.  In any case, I think that most who adventure there enjoy it.  I know that I enjoy running games there.

My recent CotMA campaign has added to the mythology by fleshing out parts of Whair (a large island to the East) and continues to be great fun.

Back in 1983, however, most adventures took place on the central continent with its dominant Fyrkingdom.  (hat tip to Ralph Bakshi's Fire and Ice) 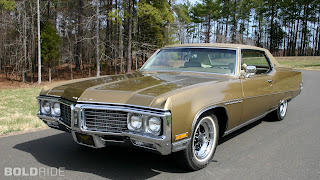 With a car came responsibilities and a job.  With a job, came cash!

I paid for my insurance and my gas and I started buying gaming stuff, most of which I still have today.

One item I purchased was the Rogues Gallery.  I really used this product a lot for on the spot NPCs.  I also REALLY love the section of characters from the original games.  That section is where this product really shines.

I set about writing up NPCs for my Queston game and I put them in a ring binder for use in my games. Here's the first one. 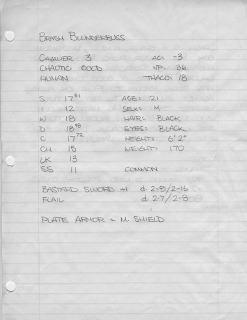 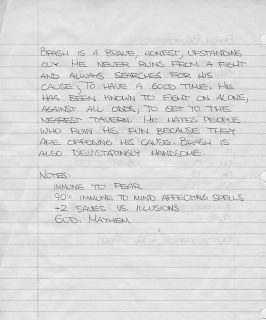 Brash was an NPC that had a friendly rivalry with Sharky Dangerthorn in my game.  He was always trying to one-up Sharky.  Usually, Brash was able to bed the tavern wench whereas Sharky would win the big pot at the local Orcish Nod game.  Brash was the literal "wall that walks like a man" and was valuable for keeping the tiny party of PCs (two) alive during adventures.  We just didn't do hirelings back in the day...

Now, if you'd like to contribute a favorite PC from any of your games -- please fill out the form below. I'd love to compile all the PCs of days gone by into a book, like Rogues Gallery, that could be purchased from Lulu POD.  Many thanks in advance for your contributions!