So, Telecanter told me in a comment that he thought dropping the Scrabble Tiles onto a map was a really good idea.  If he thinks so, I have to give it a try.

I got the old Judges Guild Tarantis City Supplement a long time ago on RPGNow.  It has a great map in the back.  It's big with a lot of possibilities.

So, I took a picture of my "tile map" with my phone.  I used GIMP to cut out all the circles and make them a little transparent.  I overlayed this onto the Tarantis map.  I stretched the circles a little to spread them out across the city a bit. 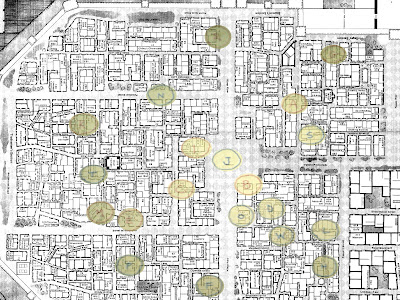 Looking where the circles are on the Tarantis map, I made some determinations about what my NPCs are doing there.

The coolest thing here is the serendipity of it all.  The randomness tells a story, more than you'd get if you made it up on your own and you get to be surprised by it as it happens.

Great stuff!  More plots and possibilities to be found as I read through the selections in more detail.