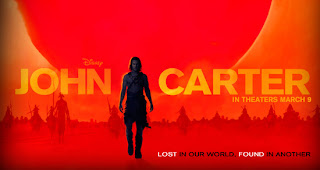 Last night, I had the opportunity to go and see "John Carter" in 3D for free.  I saw an ad in the paper for an early showing, and I signed up.  I got two tix, so I convinced my wife to go with me.

What follows should be a spoiler-free review, but I'm not always sure what qualifies as a spoiler, so if you're nervous -- read no farther.  Go see the movie for yourself.  :)

OK, on to the review!

I thought the movie was pretty good.  It had some exciting moments, some funny moments, some dramatic moments, some sappy moments...  It isn't a ground-breaking movie, but it seemed to all come together well and it was enjoyable to watch.

I'm not exceptionally well versed in the John Carter of Mars mythos, but, from what I know, it seemed to be a fitting adaptation or homage to the series.  I'm sure that true JCoM aficionados will be able to find fault or places where they could have done better, but I think they did a fairly admirable job, in my semi-informed opinion.

The CGI was good.  I found the animated characters to be believable and they were able to convey emotion to the viewer.

I especially liked the animation of the white apes.  Here's a pic.  Gotta stat those up for LL or something.  Wow! 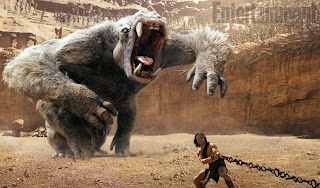 Anyway, if you're on the fence about the movie, wait for Netflix or Blue Ray.  If you went to see the Conan movie, I liked this one better.  Skip the 3D and get some popcorn instead.  :)

Email ThisBlogThis!Share to TwitterShare to FacebookShare to Pinterest
Labels: movies

I'm going to see this Friday night. Thanks for the review.