My grandson Matt turned 11 yesterday and as a gift, I built and painted up a Tau Hammerhead for him.  I wanted it to be special, so I installed some LEDs in it that will blink during the game.

What follows is the construction of the Hammerhead.  I've taken some pics and I've also included some movies. 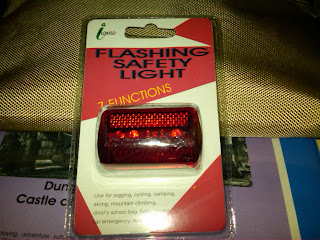 I began by going to the dollar store, where I bought this emergency flasher.  It has 5 red LEDs on a tiny circuit board inside.  I de-soldered four of the LEDs and I left one attached to the board (so that I could test the circuit as I went along...)  It's important to mention that I tested the safety light BEFORE I even started.  I didn't want to do a bunch of customizations and then find out that the light itself was junk. 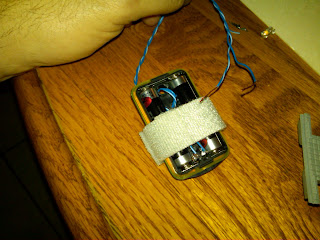 I took the red face off and converted the bottom of the light into a battery compartment.  I superglued the contacts in -- they were loose -- and I soldered leads onto the contacts.  I threaded the leads through the hole left by removal of the belt clip. 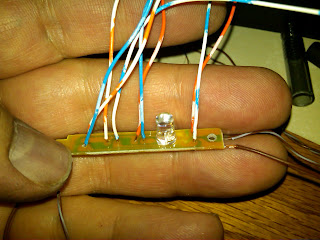 Here you see the tiny circuit board.  I soldered 24 gage solid copper wire in to where the old red LEDs used to sit.  I will be soldering these leads onto new yellow/green LEDs that I will mount inside the Hammerhead.  On the right you see two leads I've soldered to the board for power.  I will connect these leads to the wires from the battery pack.  On the left, under my thumb, you can see two other leads.  These are soldered to either side of a little "contact pad".  This pad will eventually connect to a momentary switch.  That switch cycles through the seven different "blinking" settings. 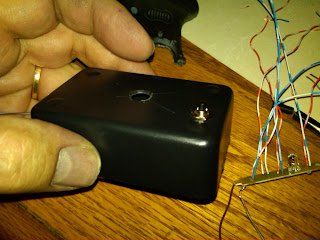 Here you see a little black plastic enclosure I purchased at Radio Shack.  This will serve as the base for the Hammerhead.  I've inserted a tiny momentary switch on the box.  This switch will control the blink settings.  The battery pack will go inside the enclosure.

I've drilled a hole in the center-top of the enclosure.  I will be attaching a standoff there to support the Hammerhead as it "hovers/flies..." 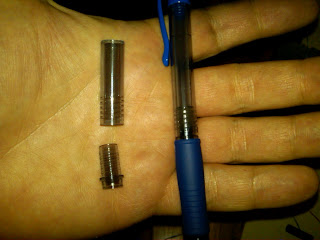 I wanted a plastic cylinder to serve as a standoff.  I took an old pen (like the one shown) and I unscrewed the bottom.  I cut the top and bottom to size.  I can now screw the bottom part, through the hole in the enclosure and into the larger standoff. 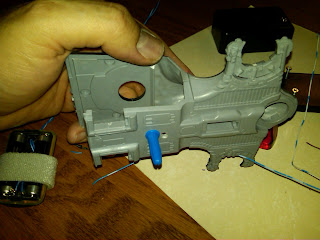 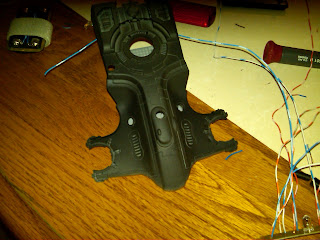 I drilled out the holes where I want the LEDs to go, then I pre-painted the top section with black paint.  All in all, putting the thing together once it was wired AND protecting the LEDs from spraypaint was a big hassle -- probably one of the most difficult part of the project. 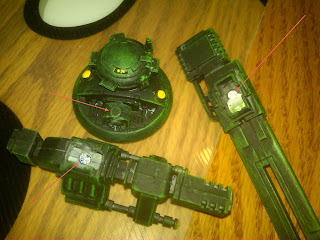 I wanted Matt to be able to swap the Railgun for the Ion Cannon on the Hammerhead.  I drilled out some small holes and superglued in some rare earth magnets.  I took the time to stack all the magnets togther IN ADVANCE so that I could draw a black dot on the same side of all the magnets.  Nothing worse than installing the magnets with the wrong polarity so that they repel rather than attract.

I finished spraypainting the model.  I did a green drybrush.  I painted a few elements with yellow and I added "MATT 2012" in Tau to the back of the model.

My paint jobs aren't award winners, but they are certainly adequate.  I'm never embarrassed when my models hit the table. 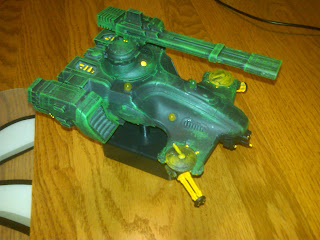 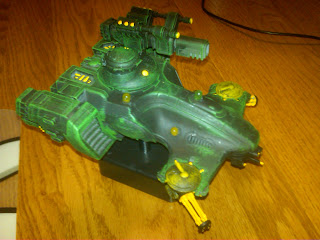