Years ago (I was in high school), I was playing AD&D at a friend's house.  We'll call him A.  He had an Arizona room (a kind of screened porch with an evaporative cooler) and that was where we played.  Think of it as an Arizona basement.  :)

For tonight's session, I was playing my monk, Robyn Hoodwink and another friend, B, was playing his cavalier-paladin, Lord Neville Trollbane.

Robyn was probably about 4th level and he was pretty pathetic.  I loved him anyway.  Every single thing Robyn had, I had to claw and scrape to get.  He had a +1 gem that absorbed into his quarterstaff -- that was his primary magic item.  He also had a cool steel ball that would expand to Indy Jones trap size when rolled at enemies.  He also had "the copper tube" or "copper wand".  More on that in another post.

Bottom line -- I had nothing and I was (relatively) happy about it.  I enjoyed playing Robyn. 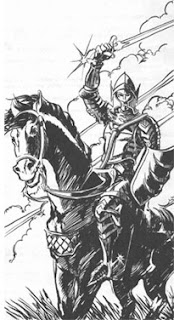 Neville was literally dripping with treasure.  I believe he had magic armor, a magic sword, magic other doodads.  I think he might have actually had a Hammer of Thunderbolts.  He had a lot of HPs and he could soak damage in combat.  He was near unstoppable.  Despite all that, I think it's fair to say that Neville wanted MORE!

On that night, we were in the bowels of Bellicose Keep.  Bellicose was a funhouse megadungeon before those things had names.  Cool place to adventure.

Somewhere in its depths, was a maze.  I don't recall what it was called, but deep in the maze you could find your heart's desire -- but you could only go in ONCE.

Robyn had died earlier in the campaign and a kindly paladin (whose name escapes me) raised me from the dead.  Did you know you get XP for that??  Anyway, in exchange for the second chance, Sir Whatzizname asked me to go into the maze to find an artifact of his choosing.  He couldn't go in again. He had quested within the maze at a time in the past to save Kranston, the local town.

I agreed to his terms.  Neville agreed to go along.

Once inside, the DM, Mr. A, told us about all the fabulous treasures that could be seen.  Literally ANYTHING AND EVERYTHING was in there.  All I cared about was the artifact for the paladin, which I quickly found.

Neville made a selection and we both departed.  Once outside with the item, B rationalized the situation and went back in.

He made another selection and he exited the chamber.  Upon stepping outside, a great energy sapped him of half his HPs.  PERMANENTLY.

This is when Player B should have thought about math more like fractions and less like Zeno.  B was under the impression that since he lost HALF his HPs the first time, he'd lose half of what was left the next time, and so on, and so on...

The night ended when Player B leapt across the card table at DM A.  Dice, character sheets, minis (for marching order) when flying.  I had to separate them.

We laugh about it now, but it wasn't funny then.

PS: the paladin did eventually get his artifact and Robyn's debt was paid in full.

That's a great story. It really brings back my memories of high school gaming.