In my Queston Campaign, I have dragons and then I have "true dragons."

True dragons are the real bad-asses of the setting.  They are AWESOME.  There are only a few of them around, one for each color.

The blue "true dragon" is Voltaaran.

Skanderbag the Unexpected, a powerful wizard, married Fyrprincess Fyrissa and as part of the ceremony, the Fyrking wanted to go on a "Dragon Hunt."

They decided to go after Voltaaran.

I don't remember the play-by-play, but you can see Voltaaran's HPs dwindle on this scan (I will never erase it...)  I know that the battle was fought on the ground and in the air.  Diagrams were drawn on the whiteboard.  The tide of battle went back and forth.

In the end, both sides called a truce and walked away.  One more round of combat and someone or some dragon was going to die.

Here are some scans of Voltaaran: 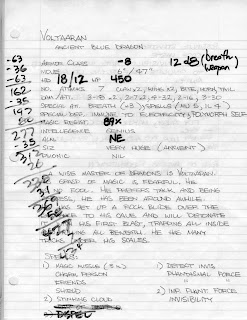 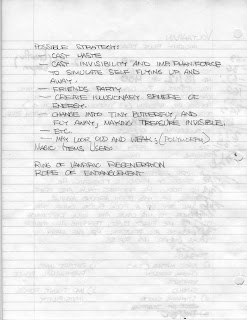