So when we last saw our intrepid adventurers, they had just been warned about some great danger by the goblin leader, they had rescued 5 goblin slaves, and they were heading down the "switchback" into unknown territory. 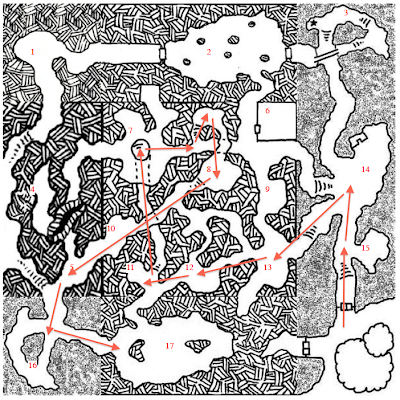 Once they arrived at 8, Halfdan explained that the crude stairway leaving the area was new.  The hobgoblins or their goblin slaves must have dug it out.

The group continued along to 10, moving cautiously in the flickering torchlight to arrive at "the chasm."

"'Ere's where I buried me brother, Krag," he choked.  "His body is below so his spirit wud always be near me."

The group approached the chasm.  It seemed bottomless.

"I dropped a torch once.  It went down and down..." Halfdan said.  The party could see the old passageway on the other side of the chasm, but they could also see another way.  If only they could get across...

They backed up to 5 and headed south.

Within a few paces, they found a passage that rounded back upon itself.  In the corner, by 16, they found three broken statues of goblins, each in a position of horror and surprise.

"Medusa!" the party exclaimed.  I explained that they don't know what a medusa is, being young, inexperienced adventurers, but it does appear that something turned these poor goblins to stone.  You may have heard rumors of beasts that turn people to stone with a gaze, but you've also heard of those that petrify by touch.

The goblin leader wept a little as he approached one of the statues and placed his hand upon its shoulder.

He talked with the slaves a bit and whispered, almost desperately, "No go!"  He pointed toward 17.  He made gestures towards his eyes.  Maybe it IS a medusa...

The party began to form a plan...