Over at Monster Brains,  Aeron Alfrey has a great post with the covers of a German magazine, "Ghost Stories."

One that really caught my eye involved gorilla-like monsters with tentacle arms. 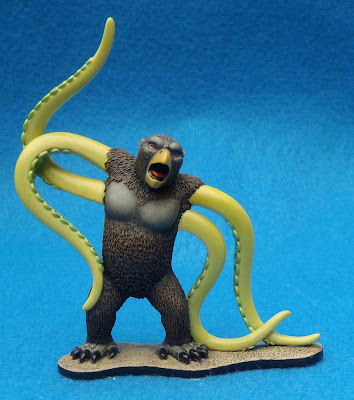 I want to believe that David Hargrave was inspired by the image below... 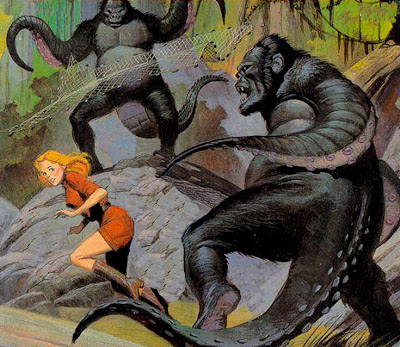 Octorillas are an obscene combination of an octopus and a gorilla, created as a servant warrior race by a mad wizard.  At some point, a group of octorillas escaped from captivity and now they dwell in remote swamps and bogs, capturing humans and humanoids for food.

Octorillas like to keep their food alive until they are ready to eat it, so they often deploy nets to entangle and trap their prey.  If hit by a net, the prey must save vs. paralyzation or be unable to move for 1d4 rounds.  Entangled prey suffer a -4 AC penalty.

For every five octorillas encountered, one will be an alpha male with four tentacles, rather than two.

If both tentacles of an octorilla hit a target, the target is grabbed.  There is a 5% cumulative chance, per round, per STR point over 15, that the grabbed target will be able to escape.  Otherwise, the octorilla will automatically hit with both tentacles for 2d10 points of damage each round.  Targets reduced to 0 HPs in this manner are rendered unconscious for 2d10 turns and awaken with 1d6 HP.