I didn't have a lot of money, so cutting arms and legs off of your little plastic (or lead) fellows might just turn a perfectly good mini into so much junk.

Luckily for me, I was (am?) kinda good at it and the original plastic space marines were modular and practically begging to be converted.

One of my first attempts was a leader.  I was inspired by this pic in the back of the WH40k Rogue Trader book -- 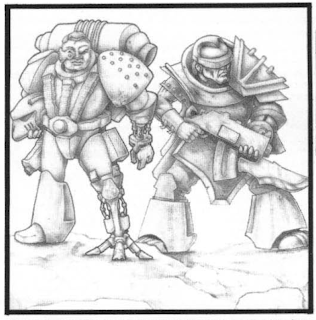 Here's my Captain with the cyberleg.  I built it out of tiny pieces of plastistruct. 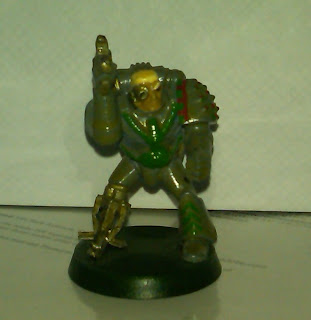 I also tried to make some guys with "combi-weapons."  Was that a thing back then?  I don't remember...  These aren't too spectacular, but you can see I went a little crazy converting bolter accessories into armor bits.  "Chainsaw shoulderpads" on both models...

I think I originally wanted the guy on the right to have a Meltagun.  I used an aluminum standoff as a giant muzzle on his converted bolter.

I have a bunch more of these that I will share in future posts!!

I also went crazy in customizing my box of plastic beakies--chainsaw blade off the shoulder pad just like you, a couple of knife blades sticking out of a fist like Wolverine's claws, double barreled boltguns, etc. Unfortunately, I left them at my parents when I moved out, and years later they ended up getting thrown away.