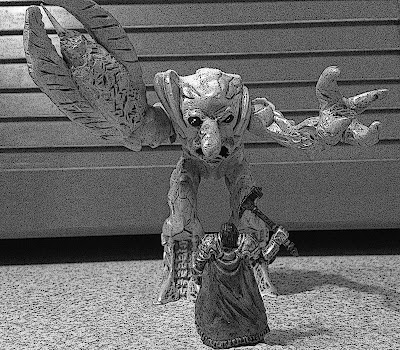 Whether this beast is an elemental, or some kind of magical construct, is up for debate among the sages.  Suffice to say that this creature is inimical to sentient life and has been known to waylay travelers and attack remote villages when it appears.

In lieu of a large claw attack, the ice troll can fire an icicle bolt at a single target for 4d8 damage (to hit roll applies; no save) or an icicle storm against a 20' radius area for 3d10 damage; save for half).  In lieu of any melee attacks (it can still use its icicle power,) it can create a wall of ice twice per day.

Each round that the ice troll spends at a temperature below freezing, it regenerates 2d4 HPs per round.  If destroyed, it will melt into liquid, slowly freezing back to ice over 2d12 rounds and then regenerating as normal.  Once it is at 1/2 HPs, it will look and function as an ice troll.  Prior to that, it looks like a mound of ice and snow.

If standing on a substantial amount of ice or snow, the monster can dissolve into it and reappear up to 24" away as its movement action.  Because of its large, snowshoe-like feet, the ice troll can move about atop snow and ice with no penalty.


This model was part of the December "World of Craftwar" competition at The DM's Craft.

Here's a link to the "how to" if you'd like to see how I made this beast!