Saw this post about Griffin Mountain (I am a big original Runequest fan) so I did a little digging on the interwebs.

As I was giving the module the once over, I discovered this graphic in the NPC record section.  I had a thought -- 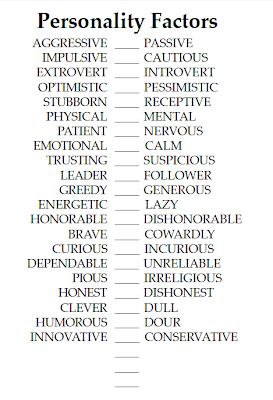 When an NPC is asked to perform one of these actions, which is to say an action along the continua represented within this chart, roll 2d6 and mark the number down.

Here's a partially fleshed out NPC.  In social situations, where he might need to be out going he is very likely to be INTROVERTED.  When posed with a problem, he is likely to favor a PHYSICAL solution.  He is very much a FOLLOWER. 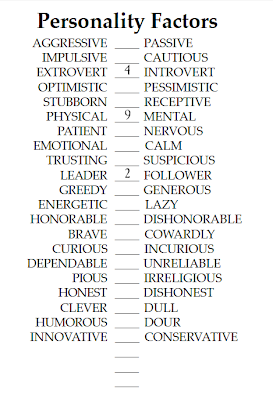 Once the numbers are established, just roll 2d6 and compare the result to the number shown.  If the number is greater, look to the right.  If it is less, look to the left.  If you roll the number exactly; pick one or pick the more likely or roll again.  Your call.  :)

In the example above, the NPC is always a follower and will not lead.

EDIT:  A gentleman by the name of Alex Chalk created a random generator based upon my crazy idea.  Thanks Alex!

Nice find. I don't remember this from Griffin Mtn. Looks like this may have eventually developed into the Pendragon personality trait mechanic.