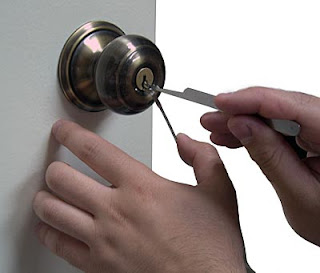 In a previous post, I suggested a couple of ideas for thief skills.  I tried the second option Wednesday night.  I will describe how I ran it and then some (very) initial reactions to it.

I use a d6 based system now.  Each skill has a number of "pips".  I translated these pips into dice.  So, if you had 4 pips in Tinkering, you now have 4d6.  If you had exceptional INT or DEX and if that was relevant, I gave you extra dice for that.  A 5 or 6 is one success.  2-4 are meaningless.  1 is a failure and *may* necessitate a saving throw.

In one test, Oryx the dwarf had 7d6.  He needed 4 successes (arbitrarily decided by me)  He was trying to jam up a mechanical pit trap so the party could cross.  He opted to roll 3d6 initially in his first attempt.  He rolled 2 successes and 1 failure.  He rolled more dice, two at a time, gaining no more successes but 2 more failures.  He rolled a save at -4 (cumulative -2 for each failure beyond the first) and he failed his save.  He fell into the pit trap.  Luckily, he has Feather Fall, so he was able to avoid the falling damage and the poisoned spikes.

After much laughter by the party, they still needed to close the pit and lock it, so they hoisted Oryx back out of the pit and he went back to work.

In his second attempt, he rolled the two remaining successes he needed to jam and disable the pit, locking the cover in the closed position.

Verdict - this worked well.  There was something to risk (falling into the trap).  Time wasn't an issue.

In another test, Kalen was using the system to open a secret door.  He has 6 pips in his skill and +2 for high INT.  8d6.  He rolled several times and eventually opened the door.  Blah.

Verdict - not so good.  I kinda forced this to try the system and it didn't work.  Nothing really to risk.  No time constraint.  No trap.


Will need to do more playtesting to see if I'm still happy with it.

The title image made me think you'd adopted my solution, which involves some cheaply-made picks and a few cheaper locks with all but two pins removed.

I started doing it as a joke after someone complained about eloquent players being able to talk their way out of a bad charisma roll, but it stuck.