James over at Grognardia has asked us to share monsters that we've "made our own."

I humbly submit the Troll.

I was never a big fan of the rubbery, regenerating troll, though I've come around a bit lately. 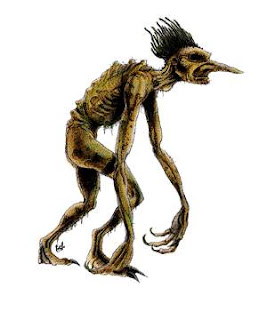 I think that this green beastie does have a place in my sandbox game, so the players had better watch out!  :)
I always preferred the trolls that I first encountered in the Rankin-Bass version of "The Hobbit." 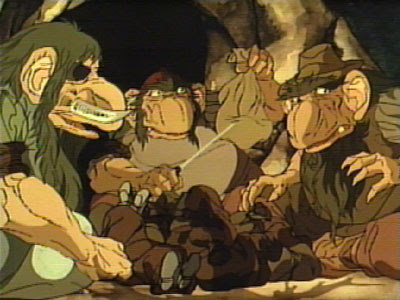 These trolls had a sort of canny intelligence and they had more personality than old rubbery up there.  I also liked the fact that they couldn't survive the sun.  They turned to stone when exposed to it. 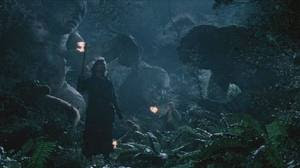 Well, I took that idea and ran with it.  In Queston, there are three species of trolls -- Stone, Steel and Sapphire.  They are named that way because that is the substance that they turn into when exposed to the light of the sun.
Each type of troll has their place in trollish society.
Stone trolls are hulking giants.  They are the muscle and laborers of the trolls.  Not too bright, but they have a long reach and strong backs.  They are essentially stone giants.
Steel trolls are the warriors.  Cunning and clever, they wield wicked weapons and are constantly at war with the humans of the Fyrkingdom.
Sapphire trolls are wizards.  They are the leaders and they are the true power of the trollish legions.  They are capable of summoning fogs and darkness so that the troll army can march by day.
In fact, the trolls are such a threat to the Fyrkingdom, a powerful wizard created "The Dropoff" (a one-mile high cliff) to separate the trollands from the humans.  Blask is the capital of the trollands, it's a pillar of rock one mile in the air connected to another pillar by a stony bridge.  Edgewatch is a Great Hold in the Fyrkingdom.

My trolls always were more intelligent, and had more of a culture, than the implied ravening unintelligent beasts of the MM. The fact that they're often encountered with ogres was a hint that there should be more to them, in my mind.

In Queston, there are three species of trolls -- Stone, Steel and Sapphire.

The image of David McCallum and Joanna Lumley as mysterious troll troubleshooters is irresistible.

@Joseph -- Agreed. The steel trolls were the heavy hitters in legions of humanoids; orcs, goblins, ogres, bugbears, etc.
@Chris -- I knew nothing of this "Sapphire & Steel" show until you mentioned it! Wow! You learn something every day... Thanks for the comment!

Very nice take on trolls! As another troll aficionado heavily influenced by Tolkien's version, I really like what you've done here -- especially the magically enabled Sapphire Trolls. I may have to hork that idea.