It has been a year since Dr. Holmes passed away.  As is often the case, when someone passes away, you develop an appreciation of their legacy.

I started playing D&D back in 1980 and I began using the Holmes Blue Book.  (Of course it wasn't called that back then, it was called just D&D) 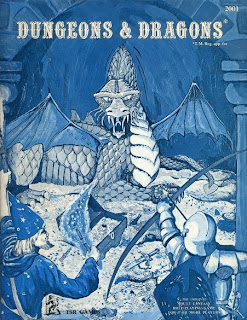 My friend Brian invited me over in August of that year after I had just returned from spending the summer away.  He had discovered the game with friends that summer and he wanted to share it with me.

I went over to his house and I made up characters.  Brian had made a clever change to the rules for my first adventure; no attributes.  I just picked classes, equipment and rolled up HPs, then we got on to the adventuring.

As I recall, we did some preliminary exploration of eponymous Keep on the Borderlands.  I "met" some of the characters there, such as the Castellan.  I didn't know what a keep or castellan was at that point.  Dictionaries and encyclopedias held a large place in my future reading time...

Eventually, Brian handwaved the trip to the Caves of Chaos and we were there.  In fact, he handwaved the whole idea of the CoC.  We started at K, "The Shrine of Evil Chaos!"

Brian mapped the whole thing as we went along on graph paper.  He stuck the graph paper to a cardboard box with tape and we used thumbtacks to represent the party and the monsters!  It was a battlemap BEFORE there were battlemaps!  Brian was a visionary!  :)

I remember using the thumbtack for "Berserker" my fighter, to indicate that I was "peeking" around the corners of hallways to see what was there.  It was great fun and the exploration was the thing.  I know we fought monsters, but it was the excitement of "what was up around the bend" that was so great.

Thank you Dr. Holmes for making that day possible and for all the exciting days of adventure since!

PS: I'm almost done reading "The Maze of Peril."  At some point in the future, I'll post a review. 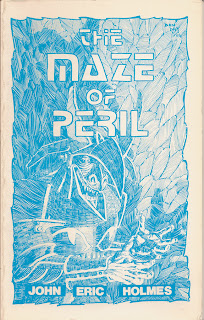 Email ThisBlogThis!Share to TwitterShare to FacebookShare to Pinterest
Labels: holmes

I got my start with Holmes basic and B2 too. I am always surprised when I realize that some part of how I play was based on the Holmes edition.

This is how I started out, in 1980, too. It sounds like Brian was a much better DM than I was - I made a complete hash out of Keep on the Borderlands. Most of the players were hooked anyway, and the rest is history.

I never thought much about Eric Holmes until he passed away last year, but looking back he did a great job of restating the OD&D rules so that even a kid like me could make sense of them. It's sad that we often don't appreciate someone until they're gone.