4e is M:tG with minis and some roleplaying

I just figured out that half the fun to 4e is the strategic use of interlocking/complimentary powers/feats.  Maybe I'm wrong, but to me, that's really the whole point to the game.

Assembling a character is much the same as deck building in Magic: the Gathering.  Then you take your character out and throw him into combat against challenges that the DM creates.  There's some story and some roleplaying thrown in there too, but mostly its about clever use of powers and strategies in battle that matters.

In one way, its not that different from some old school games.  In my S&W games, the heroes have to cleverly manage spells, magic items and mundane items to solve problems and continue the adventure.

In 4e, its just so much more... flashy!  Very little is mundane.  That's fine I guess if you want to play superheroes.  :)  You just need to understand the baseline assumptions that 4e is making.


-=-=-=-=-
As an aside, kudos to my friend JD for his clever 3D dungeon.  Very cool.  I especially like how you can be on multiple levels at once.  I'm gonna try something like this with my dungeon tiles (I just recently found a box of wooden blocks during my move!)

Here are some pics: 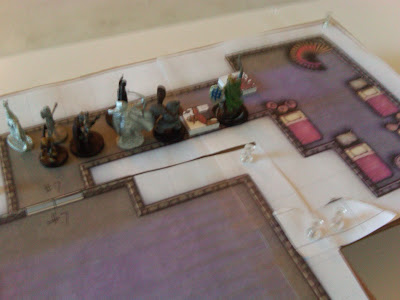 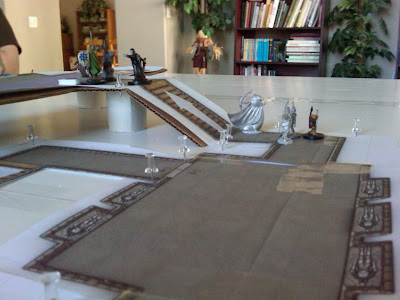 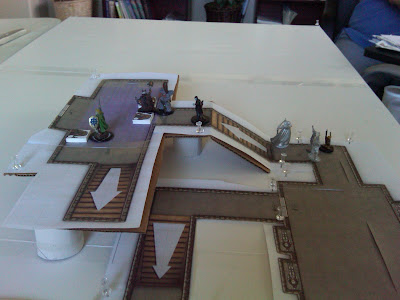 I guess the thought process is perfectly obvious: Magic was (is? I don't keep track anymore) a license to print money. In a conservative corporate culture, sticking to a proven formula is the norm.

You could think about it that way, or you can consider that tabletop gaming has been slowly dying as the audience gets older and snobbier about their games, leaving behind casual gamers and especially young children. 4e was an attempt to appeal to a generation that loves MMOs, still buys Magic cards, but has no use for how complicated and arcane tabletop gaming had become. 4e wasn't a response to a thriving, growing tabletop scene, it was a last ditch effort to evolve and save a dying industry that continues to cater to smaller and smaller niche audiences.

@Kinowolf -- I'm not sure if this is your point, but I find 4e to be extremely arcane and complicated. Microlite20 and S&@ and LL are simple in comparison.

MMORPGs are pretty complicated, too. But there are certain ways of thinking that have evolved over the childhood of MMORPGs that are blatantly obvious in 4e. Roles is a prime example. The practically grafted it in word for word.

I guess in some ways, Champions was the first to create the class-free classes we call Roles in 4e, with "bricks, energy projectors, martial artists," etc.

But in the end you are right, there are a lot of elements from "what seems popular among younger geeks" that make up this new frankenstein rpg...

As far as the 3d dungeon experiment goes, I am glad you liked it! It's amazing what an old DELL box with a few empty toilet paper rolls glued to the bottom can do, no? :)

More pics from our game (though not always very clear) can be found at http://www.epicwords.com/sowarizona