I found this reference in White Dwarf #10:

On Saturday, 28th October 1978, at Seymour Hall,
London W1, Games Workshop held i t s fourth
GAMES DAY. To say the event was a success is a
bit of an understatement! Some 2,500 people turned
up on the day to participate in all the fun and games....

For the first time at GAMES DAY, there was a special guest
of honour. We were very pleased to have Scott Bizar, director of
Fantasy Games Unlimited, fly over from the USA specially for
GAMES DAY. Scott was available all day to answer gamers'
questions and also handed out the prizes to the competition
winners.

Why is this an Easter Egg?  Scott Bizar used to own and run my FLGS, Waterloo Games.  It closed about 2 or 3 years ago, but I've been able to buy his Fantasy Games Unlimited stuff from him via the interwebs.  He even delivered it to my work on his way home.  Cool guy. 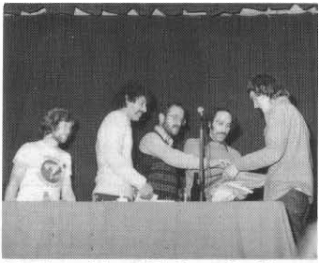