One thing I remember about Savage Worlds was using a deck of cards for Initiative in combat.  Nice idea and it works well in the game.

Then I struck upon an idea -- make cards for each monster!

Using godeckyourself.com I made a set of monster cards.  Some monsters have more than one card because they are complicated :( but that's OK. 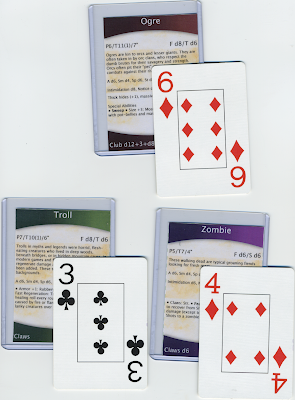 Each player gets a card then I deal these out in order at the end.  Works well and serves as a visual reminder of who has gone and who still needs to act.  The card is removed when the monsters turn comes up.

If you want a copy of my monster cards you can download them below.  Enjoy!